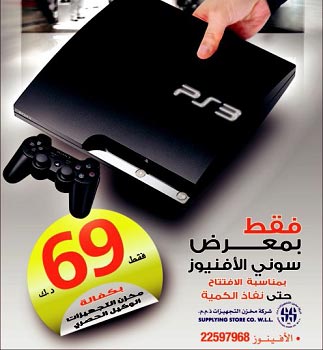 I just read on Frankom’s blog that the Sony dealer in Kuwait has an incredible offer on the new PS3 Slim. For a limited time offer they’re selling it for KD69. If they don’t have a decent amount of stock available then they’re probably already sold out by the time you read this.

Note: This deal is just available at their newly opened Avenues branch. It’s located near D*Lush and Nokia.

Update: This is what one reader had to say about his experience trying to get the PS3 Slim:

OK everyone I got it, its 120 GB euro, plays all region games, but the sony shop was horreendous i went at 11:00 am and was # 84 out of 120, it was a big mess, people shouting and old women begging for numbers. two kids even fingered the sales guy back side for a number which caused an even bigger delay, completly dis-organized , but cant blame them selling its for nearly half price, al ghanim is getting it in october for 100kd pre order, sony selling it for 69 is gonna cause chaos, but they should have been prepared to be honest. only good thing is that women dont have to wait for a number, by 12:00 i recieved mine and they had stopped giving numbers out so if you want to go in the evening i dont think there will be any left

Update2: According to Cajie a blog reader, when he passed by at 1PM the stock had already been finished.