Movies Showing in Kuwait this Weekend 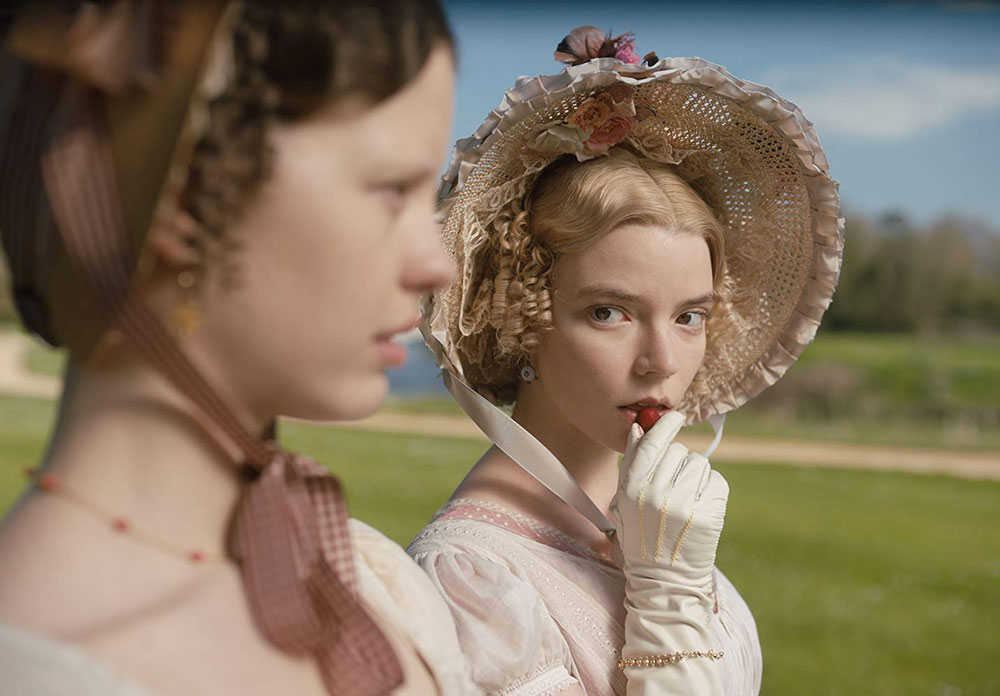 The movies below are now showing at Cinescape, Grand Cinemas and VOX:

The movies below are also now showing at the Scientific Center IMAX theater:

Numbers in brackets refer to the IMDB rating at time of publishing.

The Largest Automated Parking Facility in the World is in Jahra

I knew we had at least one automated parking facility in Kuwait (at The Palms) but I didn’t know we also had the largest one in the world. The parking lot of Al-Jahra Court Complex is fully automated and provides 2,314 parking spaces. 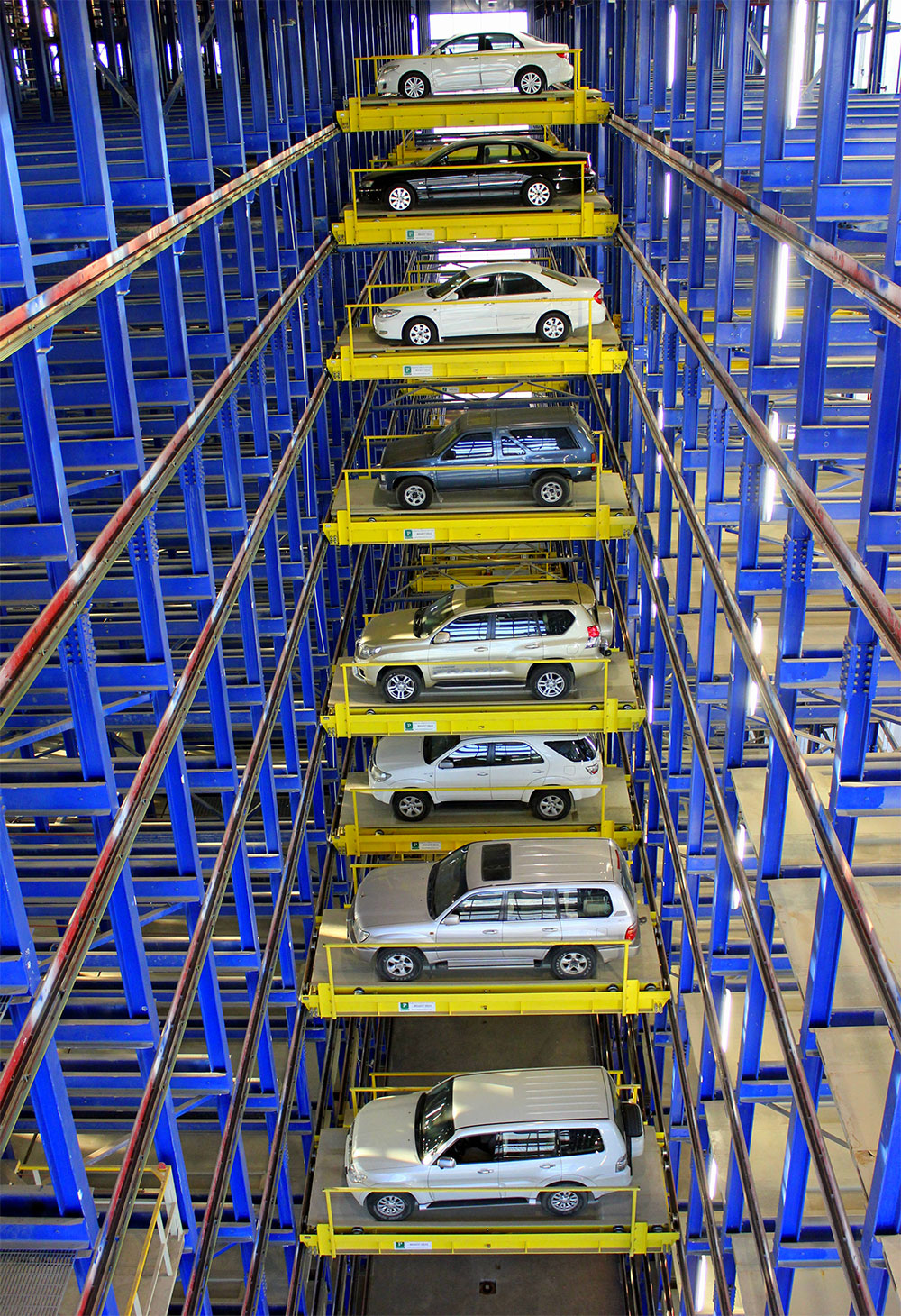 The automated parking facility provides 3 times as many car parking spaces as it would in a regular car park of the same volume – and only takes around 177 seconds for car retrieval (source). If you want to see how it works watch the short video on top. Pretty random tidbit for you guys today. 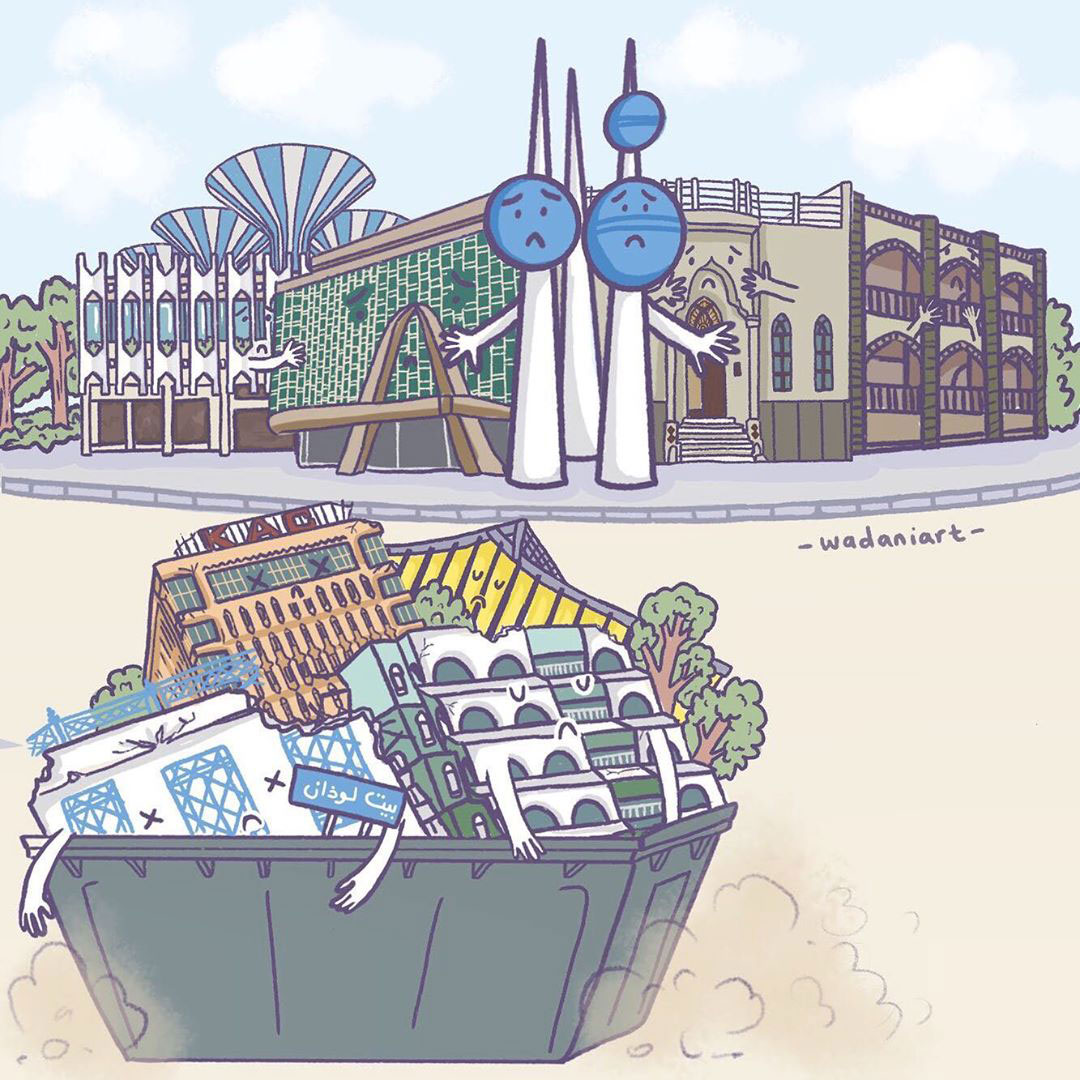 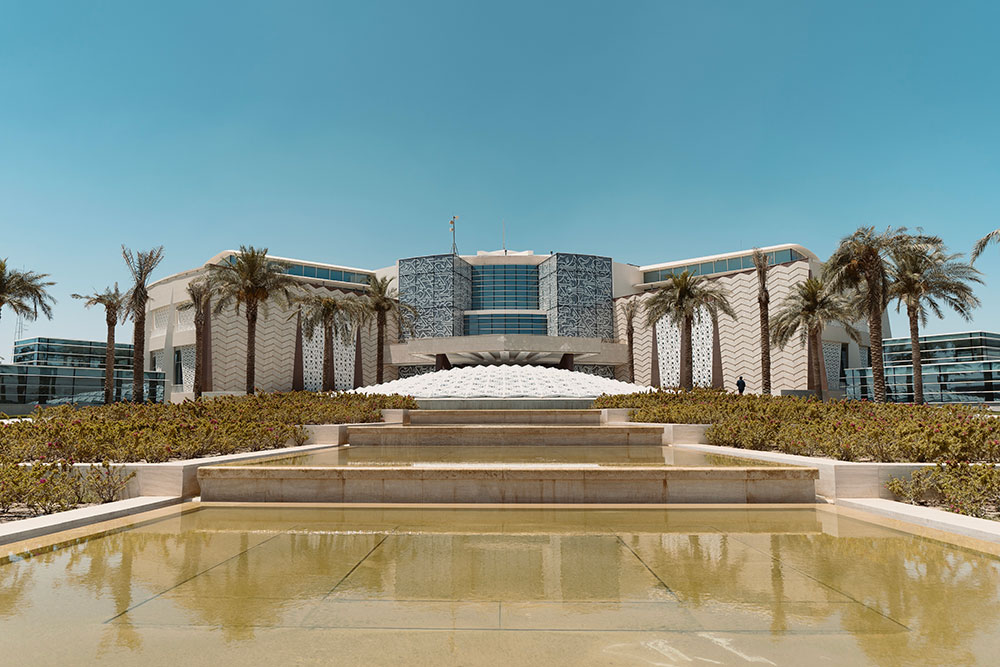 Last May, I was lucky enough to be invited on a private tour of the new Al Salam Palace Museum which was recently restored. The museum was expected to open end of last year but I guess due to some delays it just opened now.

Al Salam Palace was built in the late 1950s and was used to accommodate visiting heads of state. During the 1990 invasion, the palace was completely destroyed and stayed abandoned for years until the restoration project started back in 2013 to turn it into a museum. The palace is located right next to JACC and consists of three main museums: 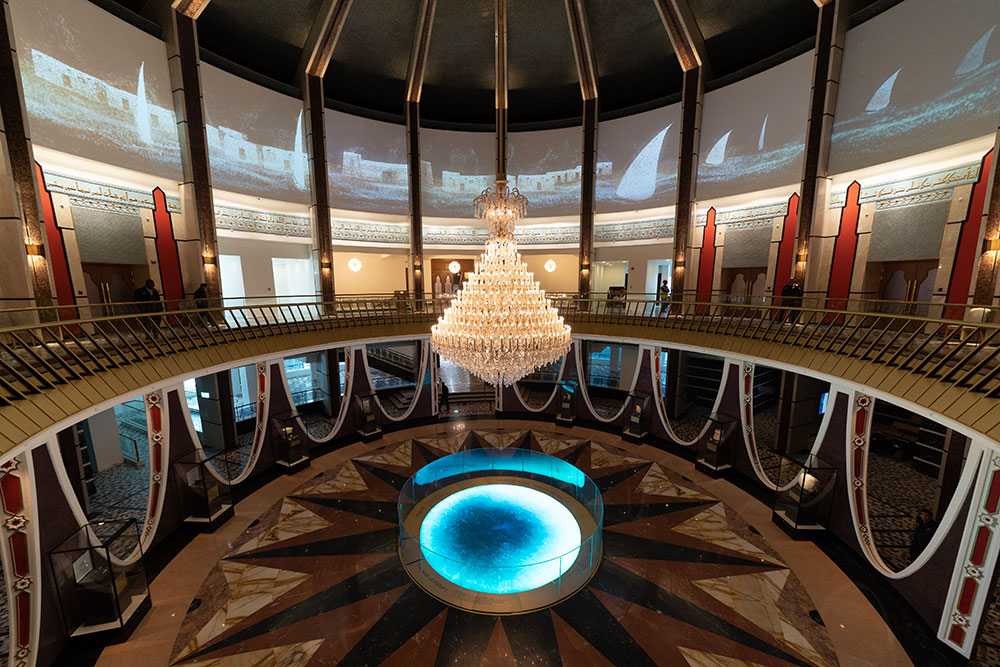 You can only get a tour of the museum and there are two kinds right now:

The Al Salam Palace website is up right now with more information and booking options, you can check it out at aspm.com.kw. You can also follow them on isntagram @aspm.kw 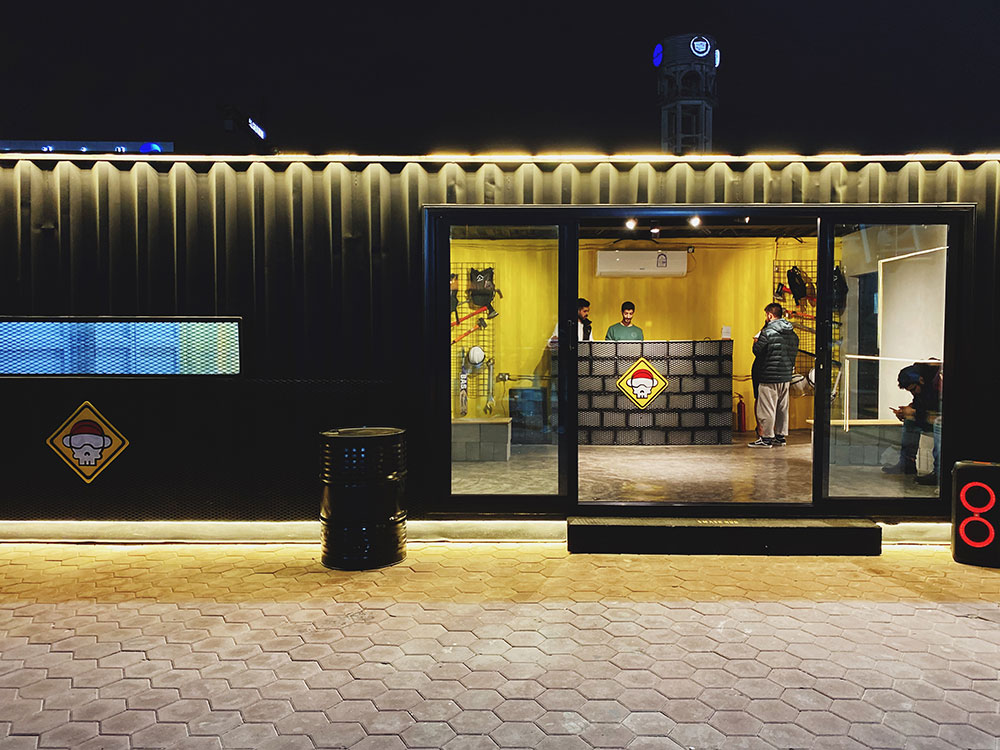 I haven’t been this excited about a new place opening up in quite a bit but last night I passed by Smash Hub and I had a blast. So much fun that I’m actually headed back there tonight again. 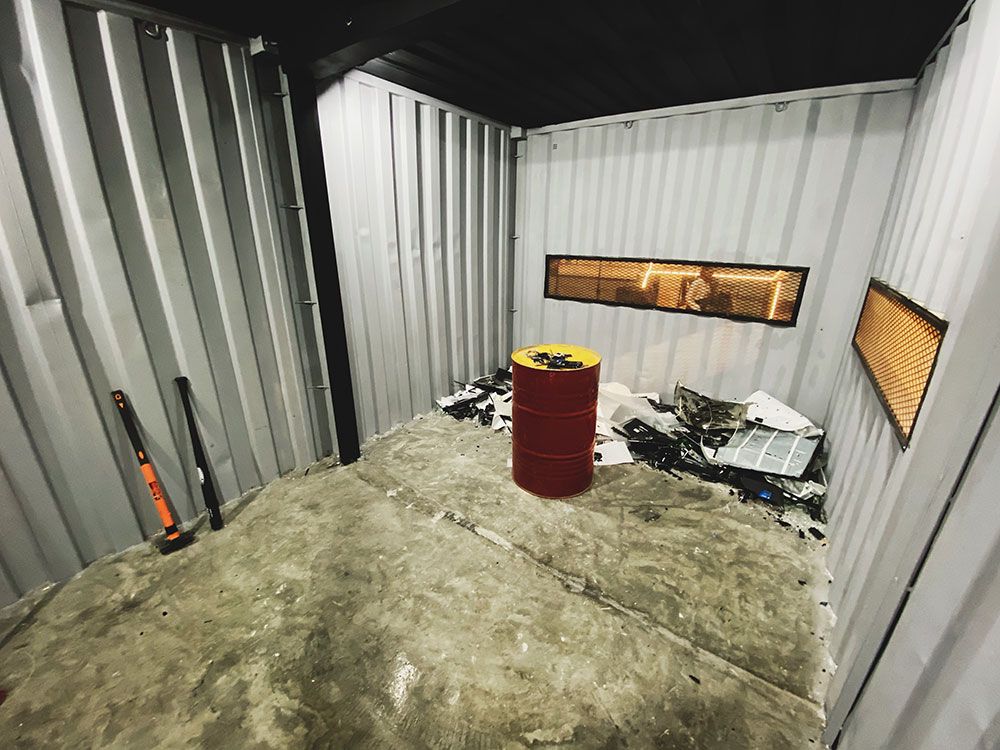 Smash Therapy
This is why I basically dropped by. Their Smash Therapy section is composed of two rooms where you go into and destroy stuff. You have different packages you can choose from, I ended up choosing the Troublemaker in which they provided me with 12 glass cups and 1 electronic item to smash. I could choose between a receiver or printer and ended up going with the printer. You can also destroy other items like a TV but at an additional cost. Once you select your items they set it up in the room and provide you with disposable overalls and protective gear to wear. You also get to choose two weapons of choice, I ended up going with a sledgehammer and a baseball bat. I was tempted to go with an axe but figured with my clumsiness I might not leave the room in one piece. Finally, I also got to choose my on smash playlist which was a nice surprise. I didn’t have much time to think but I think I made the right choices:

Once inside the room they take you through some basic rules and then leave you to it. I have to say, this was so insanely fun. It didn’t take long to smash 12 glass cups and a printer, in fact, I didn’t even get past my first song on the playlist, but damn it was fun. After I was done I told the guys they should create a monthly membership package since I’d love to drop by once a week just to vent out on a flatscreen TV. Below is a video I shot of the guy before me smashing some glass cups. Even smashing something so small and fragile like a glass cup was fun. I also have a short video of the guy smashing a TV with an axe, it’s a vertical video though and you can watch that here.

Axe Throwing
The other activity Smash Hub offers is axe throwing. I was just very recently having a conversation about this with a friend since it’s an activity thats gaining popularity in the States right now and I was telling them someone should bring it to Kuwait. Well it’s here now. It’s similar to throwing darts except you throw an axe. 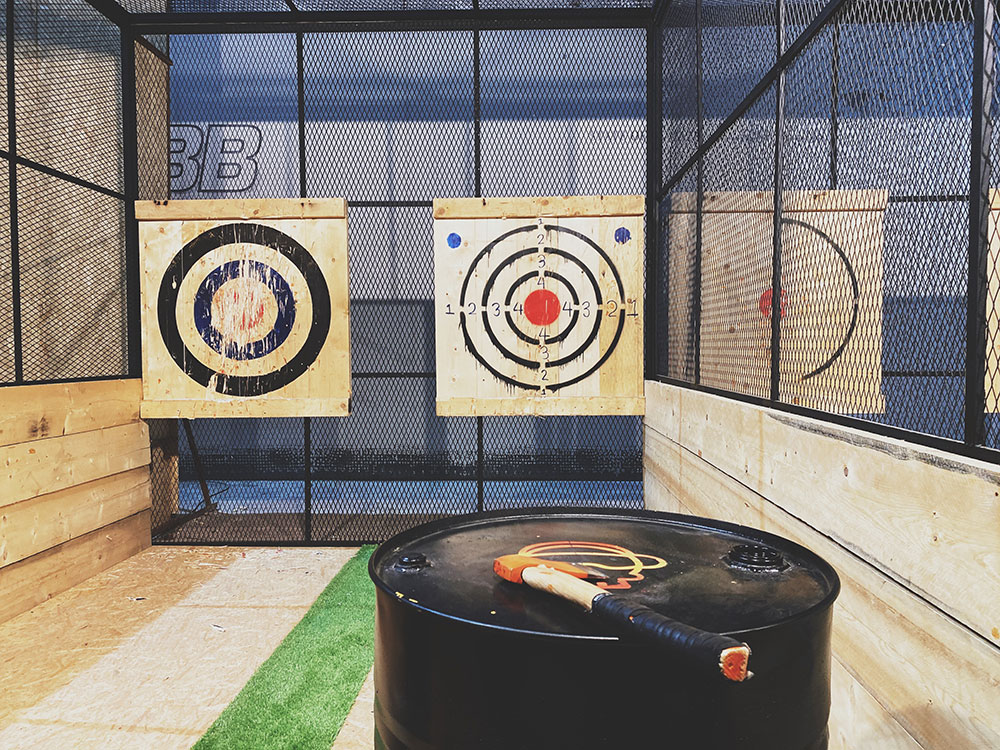 I tried it out and it wasn’t as much fun as smashing a printer, but maybe if you’re with a group of friends it’s more enjoyable. Also maybe with lots of beer and loud music. 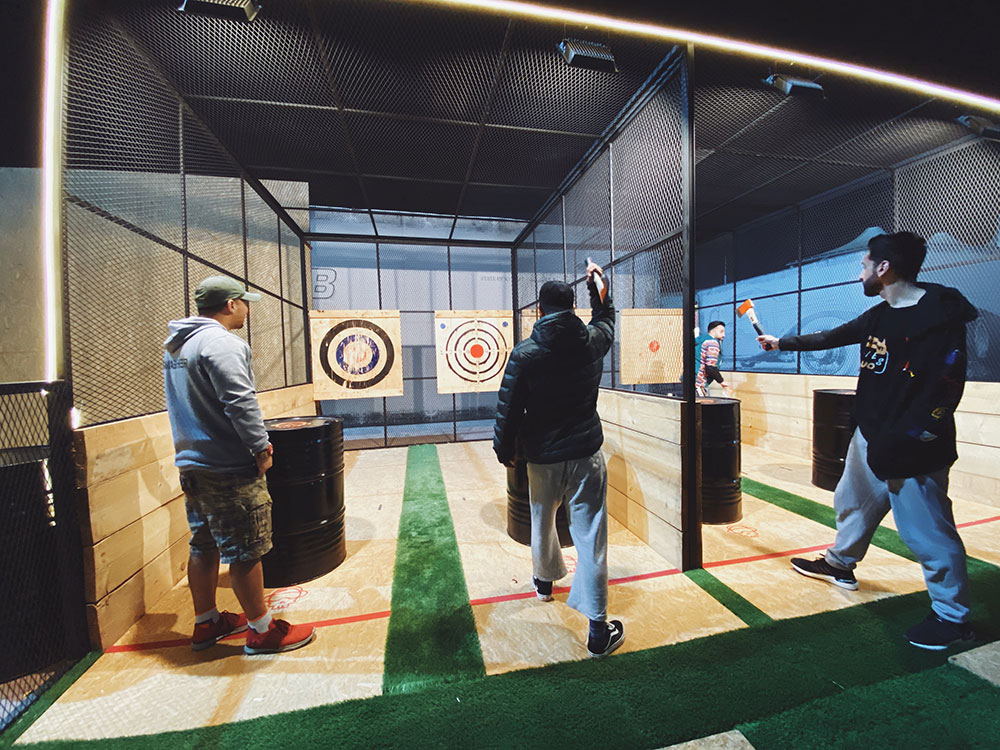 So lets talk prices. They currently have launch prices which are as follows:

Smash’n’nGo: 6KD for a dozen glassware or a dozen axe throws 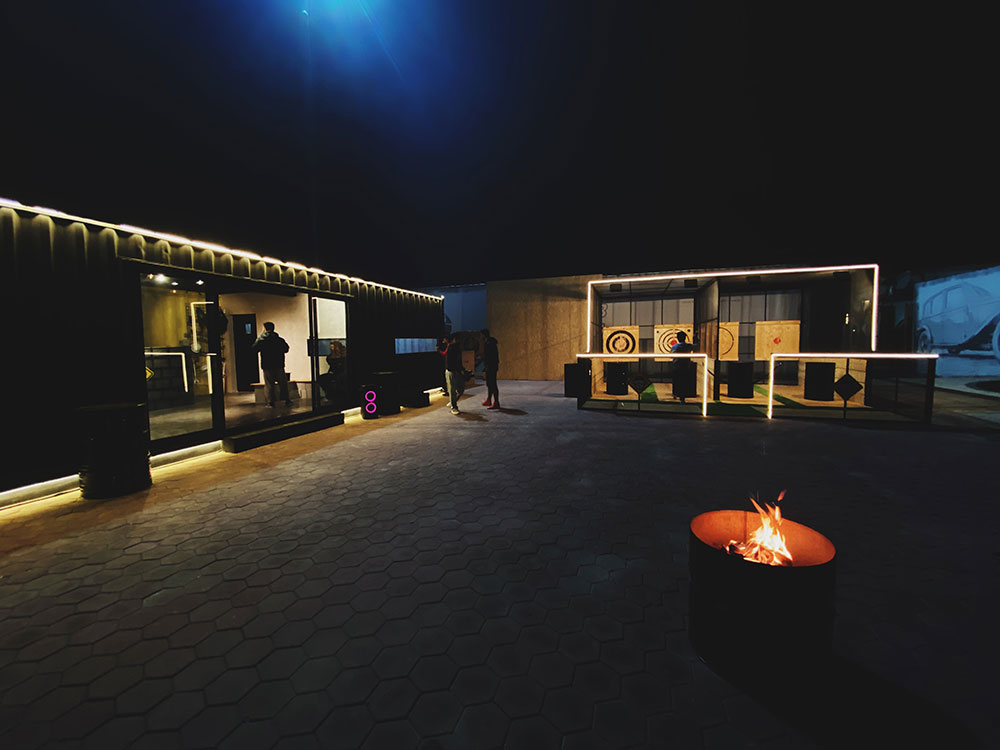 I went with the Troublemaker and Axe Pack so my total came out to KD20. In hindsight, I would have taken the Troublemaker pack and added a TV to it for an additional 20KD. And maybe a glass pack on top of that as well. In case you want to bring your own items to smash you can, but they would have to approve it first.

If you want to try out Smash Hub they’re located inside Sirbb Circuit in Shuwaikh (go all the way to the left once you walk in). They’re open daily from 6PM to 10PM and you can check them out on instagram @smashhubkw

The Last Skate at the Historic Ice Skating Rink 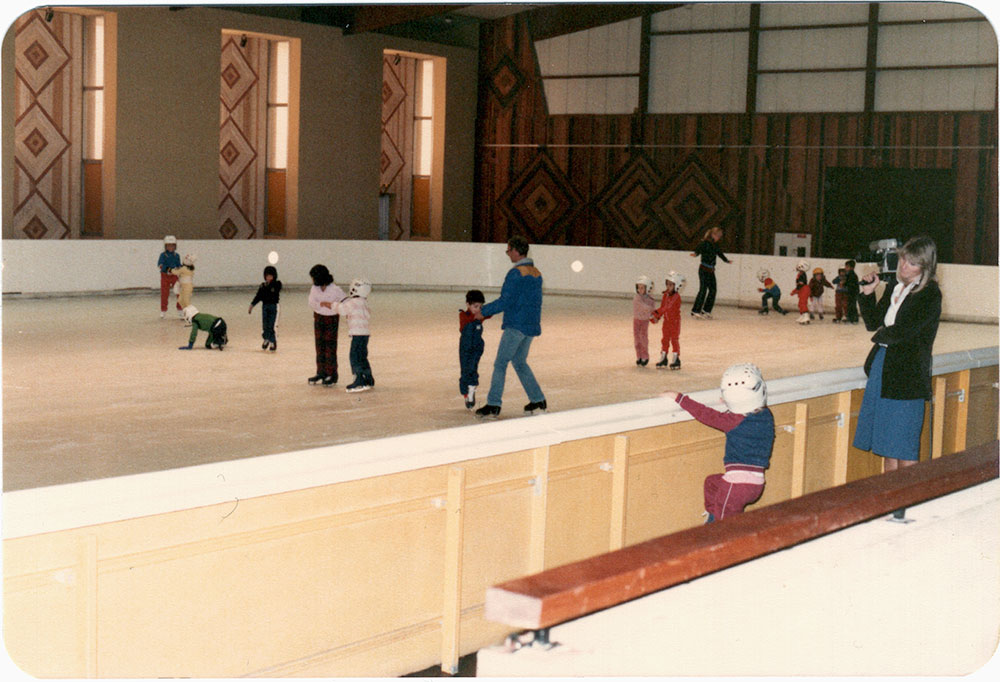 The ice skating rink which has been around since 1980 will be closing down tomorrow to get demolished. In its place I’ve been told they’ll be building a concert hall which will be used to hold the Hala February concerts.

It doesn’t make sense I know, and whats worse is that I don’t understand why they can’t just keep the ice skating structure and just turn the interior into a concert hall. In any case, the decision has been made and this historical site will be demolished in the same way many other significant structures have been demolished in the past. 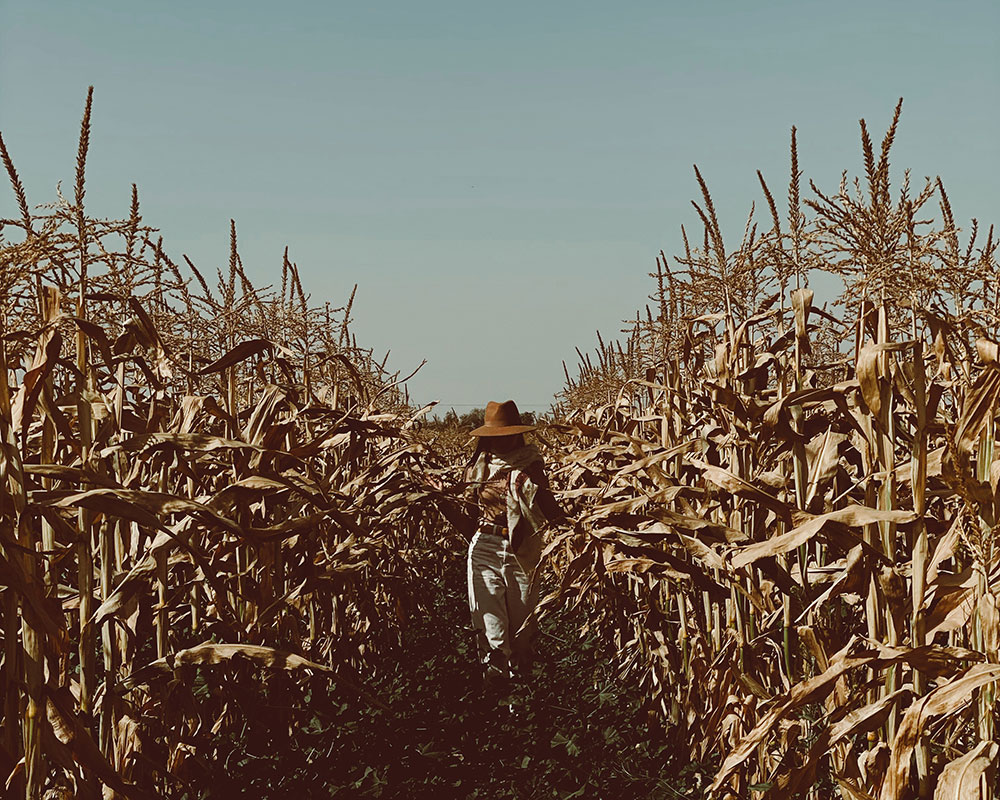 This past weekend I picked up a Mercedes GLE to review for the blog and since it was a pretty comfortable car to drive, I decided I needed to go on a long road trip. So I headed to Al Bohayra Farm on Friday to check it out. 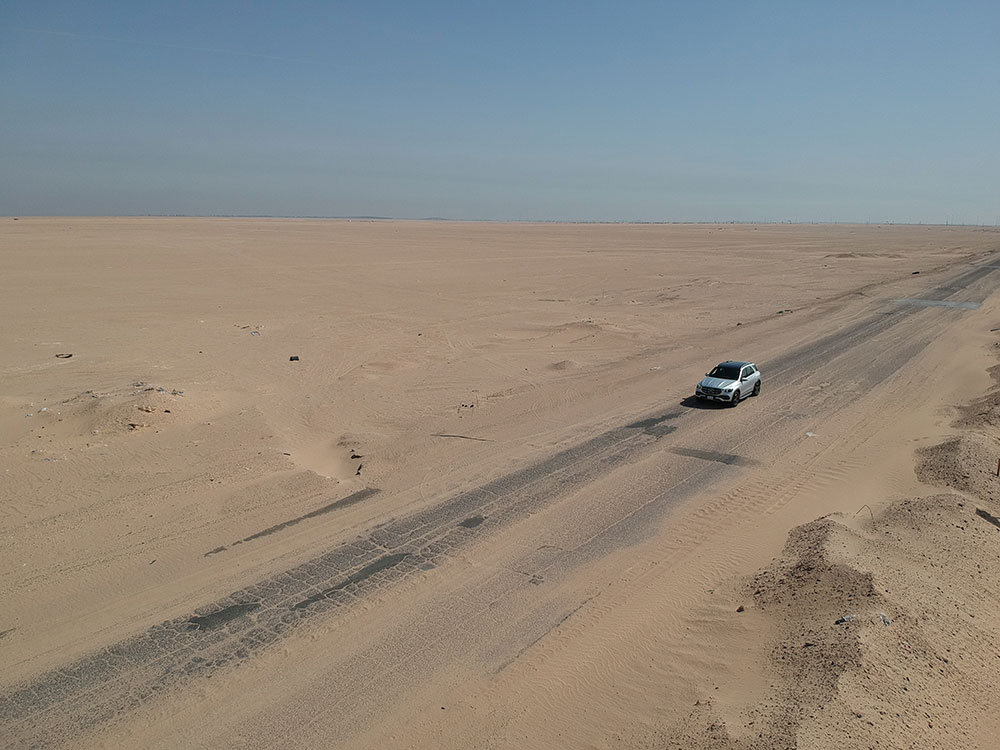 Getting there was a bit dramatic. Other than the fact it was a long drive (around an hour and a half) but Google Maps took me on a strange route. I took the causeway bridge to the other side and everything was great for a while after the bridge but then suddenly the highway ended with barriers and was diverted to a small pothole-ridden road (pictured above). The remaining highway was still under construction but oddly some cars were going through the barrier and driving on the semi-finished highway. I drove for a while on the pothole-ridden road but it just got really bad and even though I was in an SUV it was still really bad. So I got off the small road and drove down onto the unfinished highway which was pretty finished actually not sure why they had it closed off. But, after a while, even the unfinished highway ended with barriers diverting all the cars onto the adjacent road going against the flow of traffic. Some cars drove through the barriers into the even more unfinished highway while the rest of us were suddenly driving on a highway with cars coming towards us. It was super confusing and after a few minutes, we found a way to enter the unfinished side of the highway where we continued driving until we got back to normal roads. There definitely must be an easier way of getting there but it must have been one of those days where Google Maps wanted to mess with me. 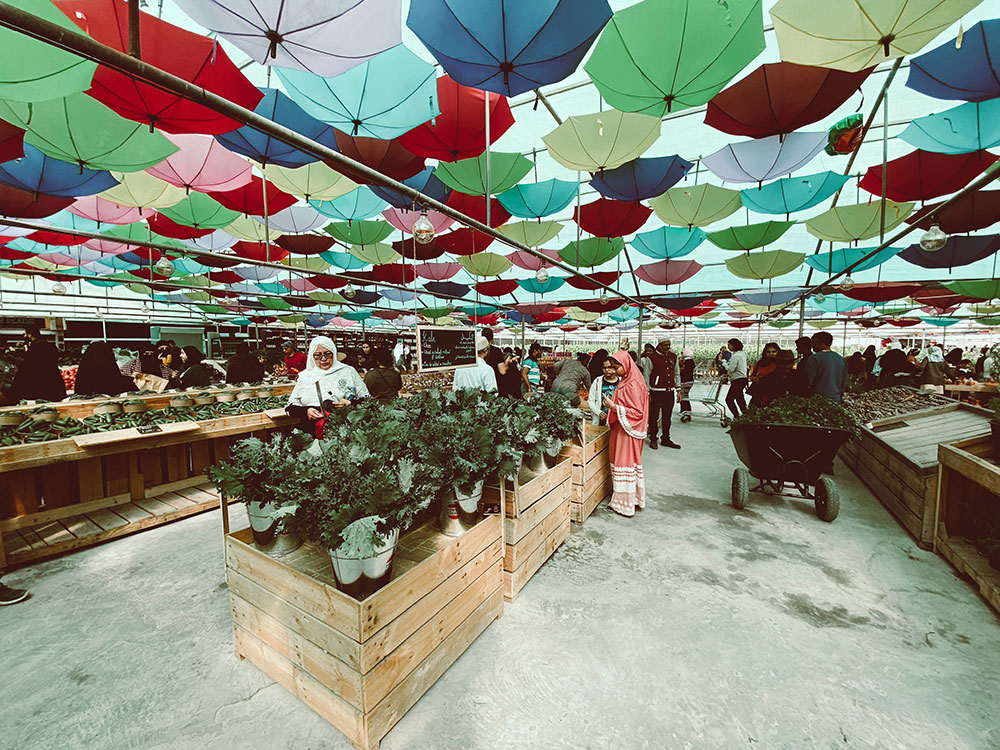 Once we got to Al Bohayra Farm I was surprised at how busy it was. There were tour buses parked on the main road and their huge parking was pretty full. There is no entrance fee, you just walk in through the main gates and explore the farm. There are various things to do on the farm including renting bicycles, picking strawberries, exploring the farm, shopping at the farmers market and having delicious corn on the cob or lunch at one of the many fast-food restaurants like Burger King, Applebees, Pizza Hut and a few more (no farm to table restaurant if you’re wondering). There are various play areas for the kids, pony rides and lots of farm animals to see. 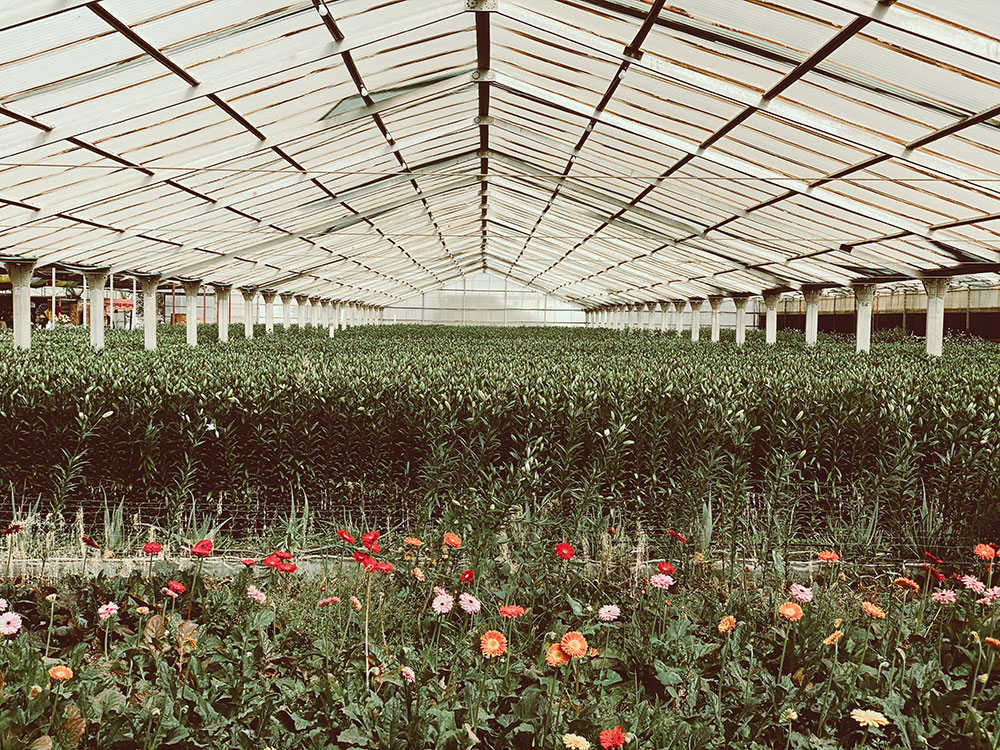 Even though there were so many people on the farm it never felt too crowded. The farm is large and the facilities there are made to handle a large number of people. Even some of the restaurants like Burger King had two branches on the farm. I really had a good time and I want to start checking out some of the other farms now that are also open to the public. 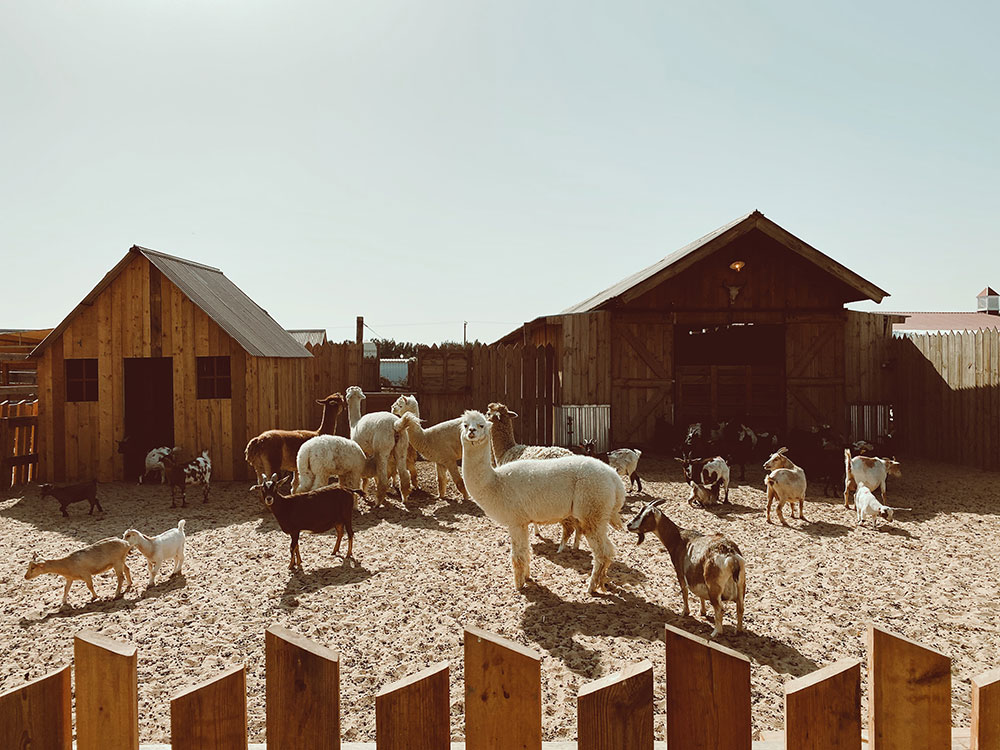 Al Bohayra Farm is located in Abdali which I had never been to before. I drove around the area a bit after visiting the farm and it felt like I was driving through one of those random towns while doing a U.S. road trip. There was also a bit of a wild west feeling which I kinda liked. 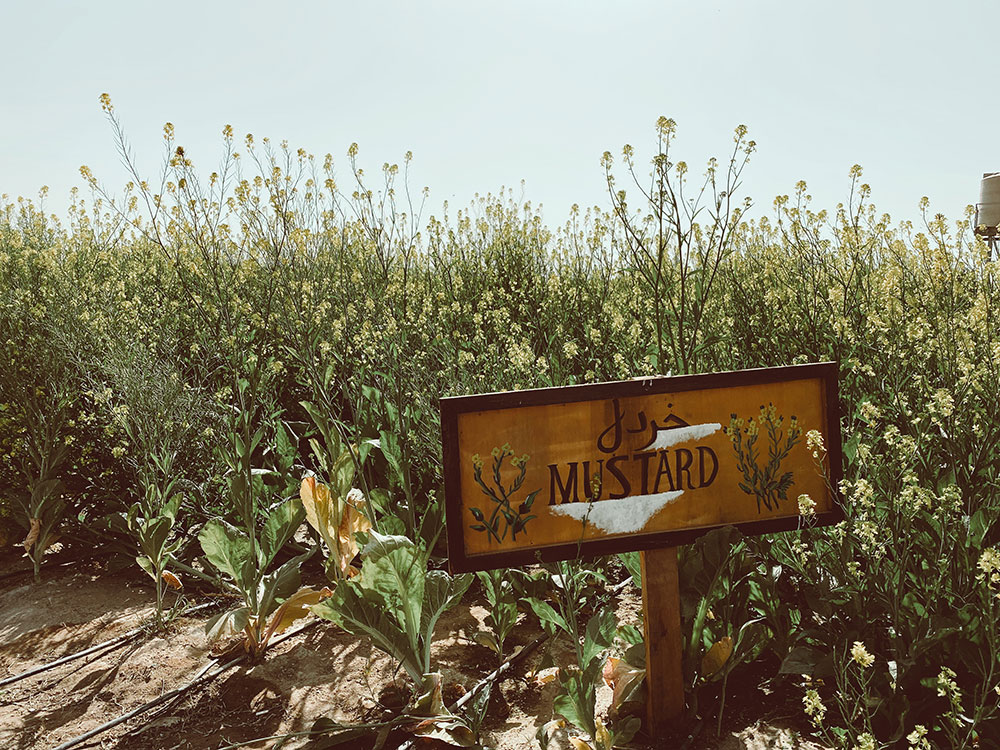 Al Bohayra Farm is worth checking out if you’ve never been. The farm is open every Friday and Saturday from 10AM to 9PM. Their instagram account is @albohayra and here is their location on Google Maps.

I got the email below from a reader who used to live in Kuwait back in the 50s. Not sure how I never came across the video above myself!

Ahmadi In the 50s
I moved out there in 49 and went to the Anglo American school as did my sister Vivienne, In 54 I was sent to school in England and returned every summer to Kuwait on the lollypop Special flights. Most of the Holiday was spent at the Hubara Club around the pool and I remember going to the outdoor cinema with just a chair on the sand.

My last visit was in 1966 with a friend from the uk and I took some movie pictures of my time out there, this has been on Utube for some time under the title “Holiday in Kuwait 1966” which some of you may find interesting enjoy